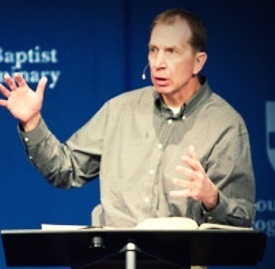 This year Mike will be teaching us about creating gospel centred disciples  from various passages within the book of Mark. Many who were in attendance last year were overwhelmingly blessed by Mike's faithful exposition of Romans 6. We are excited he is coming, he is excited to come...there is just a lot of excitement all around on this one.

For those who are unfamiliar with Mike, here is a little bio... Mike and Bev, married since 1988, live in Mike’s childhood home in Kenosha with their 3 children, Abigail, Madeline and Graham. Mike responded to a gospel invitation as a young boy and was led by his father to put his trust in Christ. Prior to leading the launch of CrossWay Community Church in 1998, Mike served for 15 years as an Associate Professor of Homiletics (preaching) and Pastoral Theology, as well as chairman of the Practical Theology Department at Trinity Evangelical Divinity School in Deerfield, Ill. As Senior Pastor, Mike gives direction to the leadership team and pastoral staff, functions as the primary preaching pastor and helps cast vision for the overall direction of the church and its ministries.

Three more speakers for 2013 will soon be announced. Just so you all know...David Platt is not one of them. Our regional president Stephen Bray recently attended the TGC national conference in Orlando. He worked his "Newfie" magic and will have a list of speakers for the 2014 conference that he will announce at this year's event.

Again this year, Logos Bible Software will be joining us; along with a whole slew of new vendors that will be offering resources at incredible discounted prices. SO...keep your eyes open for all the announcements and info that will be coming your way in the next little while. Registration is open, so if you have not registered yet, click HERE and reserve your spot at "Follow Me" 2013.